Cinnamon has been widely studied due to its traditional health-related uses. Thanks to this, today the evidence supports many of its properties. Learn all about the health benefits of cinnamon. 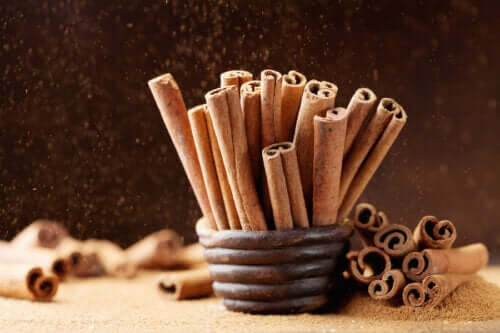 Cinnamon is a spice that comes from the inner bark of trees scientifically known as Cinnamomum. It’s an ingredient that’s had a high value throughout history both for its gastronomic uses and for its medicinal applications. Do you know about the health benefits of cinnamon?

While it’s not a miraculous ingredient to fight disease, cinnamon has compounds that promote health. According to information in Critical Reviews in Food Science and Nutrition, it has anti-inflammatory, antimicrobial, antioxidant, cholesterol lowering, and immunomodulatory effects.

In addition, it’s shown promising results as a complement to diseases such as type 2 diabetes. Best of all, it’s a very economical ingredient that you can acquire easily in supermarkets and herbalists. Here are its main uses.

We recommend reading: The Therapeutic Benefits of Cinnamon Oil and How to Make It

There are many types of cinnamon, but only four are used for commercial use:

Cinnamon is popular throughout the world for its particular taste and smell. This is due to its more oily part, which is rich in a compound called cinnamaldehyde. According to information in the National Library of Medicine of the United States, this substance has hypoglycemic, vasodilator, and antifungal effects.

In fact, many of the health benefits of cinnamon are attributed to this substance. However, it should be noted that, in high doses, cinnamon can be harmful. Therefore, its consumption should be moderate, always in minimum quantities.

In addition, we can’t consider it to be a cure for diseases and it can interfere with the action of certain medications. Because of this, it’s advisable to consult your doctor before taking it as a supplement. Let’s see the details of their properties.

The antioxidant components of cinnamon have an anti-inflammatory effect that help reduce the risk of disease. A study published in Food & Function supports this, suggesting that its organic extracts have a powerful anti-inflammatory activity. This, in general, prevents inflammation from attacking the body’s own tissues.

People with type 2 diabetes should become best friends with cinnamon.

Having it on any empty stomach or after meals lowers your blood sugar levels. A study in Diabetes, Obesity, and Metabolism provide evidence on the subject.

According to other research published in the Journal of the American College of Nutrition, cinnamon compounds such as hydroxicalcone act on cells with an effect similar to insulin.

Cinnamon essential oil, known for its antifungal properties, is useful as a treatment for athlete’s foot. On the affected foot, previously washed and dried, we apply the oil and cover it with a sock so that it acts at night and doesn’t stain the sheets. In addition, it works as a natural deodorant for feet.

4. It can help with respiratory problems

Cinnamon also has anti-inflammatory and antibacterial properties. Therefore, according to a study published in the journal Nutrients, it can help us reduce the symptoms of respiratory problems. To this end, you can drink it as an infusion, up to 2 times a day.

5. It can help you to lose weight

Cinnamon won’t reduce excess weight on its own. Don’t forget that a healthy weight is the sum of several factors such as healthy eating and regular physical exercise. However, due to its beneficial properties, this spice can serve as a supplement to lose weight.

A recent meta-analysis published in Clinical Nutrition concluded that cinnamon supplementation favors obesity control. Therefore, it may be complement in the management of obesity.

Want to learn more? Lose Weight With This Cinnamon and Bay Leaf Tea

6. It can help to prevent Alzheimer’s disease

Cinnamon has essential oils, magnesium, zinc flavonoids and iodine, which favor blood circulation, and therefore the proper functioning of our brain.

A study the appeared in the Journal of Alzheimer’s Disease found that substances such as cinnamaldehyde and epicatechin contained in this spice can inhibit the accumulation of a protein in the brain called tau, which is often associated with Alzheimer’s. For now, this remains a matter of investigation.

7. It keeps you young

Because of its nutrient and antioxidant content, it’s not surprising that cinnamon also benefits skin health. Many believe that both its consumption and external application may help prevent premature aging. However, there’s a lack of evidence to prove it.

8. It can relax your muscles

Due to its anti-inflammatory properties, it’s popular in oils for massages. Its aroma serves to relax tired and sore muscles. You can also enjoy its benefits in a bath.  It may also be useful to add the oil to the bath water.

9. It can relieve menstrual cramps

A study published in the Journal of Clinical and Diagnostic Research concluded that cinnamon can be considered as a safe and effective treatment for primary dysmenorrhea. When there are menstrual cramps, ingesting a cup of infusion serves as a pain reliever.

Although the evidence in this regard is limited, the consumption of cinnamon could be beneficial to take care of bone health. Both its antioxidant content and its minerals and anti-inflammatory agents would be behind this effect. Specifically, they may help reduce risk such as osteoporosis and inflammatory conditions.

Cinnamon for your health

In itself, cinnamon isn’t a treatment for any illness or disease. However, included in the framework of a balanced diet and a healthy lifestyle, it’s beneficial. Its components, through various research studies, have shown positive health effects.

The important thing is to take it in moderate amounts. For its safe use, it’s best to consult a doctor before taking it regularly. The professional will help to establish if there are risks of unwanted effects or possible contraindications.

Try this Exquisite Honey and Cinnamon Banana Bread
Do you wan to make something nice and sweat, and not feel guilty about it being unhealthy? If so, then give this honey and cinnamon, banana bread a try. Read more »
Link copied!
Interesting Articles
Medicinal plants
The Characteristics of Moringa Oil and Its Uses