The many benefits attributed to sea salt have not been proven by science. Contrary to what many people think, it's not healthier than table salt. What should you know about it? 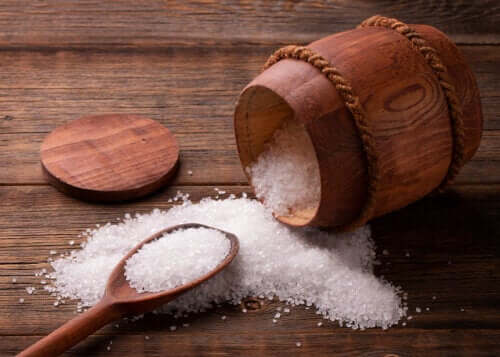 Until recently, sea salt was seen by many consumers as a healthy alternative to traditional table salt. In fact, it was credited with more than 10 health benefits.

However, in the spirit of caring for everyone’s health, nutrition experts have disproved many of the claims being made about its consumption. Next, we’ll review the effects of sea salt and the recommendations regarding its consumption.

What is sea salt?

Sea salt is obtained from the evaporation of seawater or saltwater lakes. Due to its thick and crispy texture, it’s often used in gastronomy to prepare various types of recipes. Also, for this same reason, it’s added to body scrubs and other products.

Due to the boom that it had thanks to many advertisements, this type of salt became popular as an alternative to traditional table salt, whose ingestion is associated with various health problems. In fact, many came to claim that sea salt had less sodium and that it was full of beneficial nutrients.

However, as a publication in the American Heart Association points out, both table salt and sea salt contain approximately 40% sodium by weight, and therefore consumption recommendations don’t differ from one version to another.

Sea salt contains high levels of sodium. Therefore, the recommendations for consumption are the same as those for traditional table salt.

The benefits of sea salt: Are they greater than those of table salt?

The specific answer is no. Although many have labeled it as a superfood, the truth of the matter is that the nutritional composition of sea salt doesn’t vary much in comparison to table salt. Its big difference, according to the Mayo Clinic, is in its taste, texture, and processing.

Thus, while sea salt is obtained from the evaporation of ocean water with minimal processing, table salt is usually extracted from underground salt deposits. What’s more, it goes through a series of treatments involving the removal of minerals and adding of additives.

However, according to information in the Journal of Sensory Studies, it’s true that, depending on the water source, sea salt is left with certain trace elements and elements, including potassium, iron, and calcium.

However, their quantities are minimal and one would have to eat large portions to approach the amount provided by other foods with these same minerals.

Read also: 6 Truths About Consuming Too Much Salt

What are the 10 benefits attributed to sea salt?

Perhaps because of the confusion generated by advertising about sea salt, many people assumed that it had great health benefits. However, at this point, we know that this is an exaggeration, as the nutritional composition is almost the same as table salt.

The truth of the matter is that sodium, regardless of the source, is a necessary mineral for maintaining health. According to information published in Advances in Nutrition, in adequate doses, that is, no more than 5 grams a day, it can help the following functions:

Sodium, in moderate doses, is a determinant for health and disease prevention. However, many tend to eat it in excess.

Do you want to know more? Read: Treat Oily Hair with Sea Salt

Because of its mineral content, which differs from table salt, many health benefits have been attributed to sea salt. However, many of these properties were exaggerated at the time and most are now denied. The alleged benefits are as follows:

To date, there is no evidence that eating sea salt actually provides these health benefits. Therefore, like other types of salt, you should eat it in moderation. And, under no circumstances should you consider it a cure or alternative treatment for any disease.

The WHO warns that excessive sodium intake is associated with hypertension and an increased risk of heart disease and stroke. For this reason, it recommends taking into account the following:

What should be clear about this salt?

Those multiple benefits attributed to sea salt are not true. In fact, this type of salt is quite similar to traditional table salt, except that it hasn’t been processed and isn’t fortified with iodine.

So, just because it’s natural doesn’t mean that it’s better for your health. Like other sources of sodium, excessive consumption can have negative consequences – keep that in mind!

The Benefits of Sea Salt for Cellulite
There are benefits of sea salt for cellulite. That is to say, it can improve the appearance of your skin. Check out this natural treatment! Read more »
Link copied!
Interesting Articles
Garden and outdoor spaces
Lettuce Varieties and How to Grow Them

There are many lettuce varieties you can grow in your garden and they come in different sizes, shapes, and flavors.…

It's true that there may be carcinogenic compounds in certain foods. However, you should be careful about how you interpret the…

There’s a lot of talk lately about using natural and organic skin care products. Some people choose them because they have sensitive skin and need to avoid products and creams…

Today, we're going to help you discover some alternatives to the foods that you're used to. Let's have a look…

Everyone around the world eats oranges. However, while many people don't know this, orange peels are also sources of a wide…

These small, dark, gluten-free, fiber and anti-oxidant rich seeds are all the rage. And with good reason! Chia seeds are…