10 Causes and Types of Skin Rashes

Different types of skin rashes cause skin inflammation and irritation of the skin. However, there are some differences between the clinical manifestations of each. Read on to learn more about them! 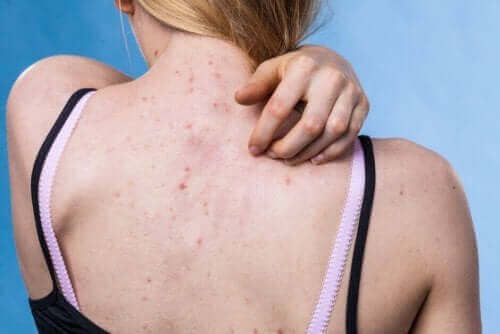 There are many different types of skin rashes. However, they all cause inflammation and irritation. Some aren’t contagious, but they all may cause embarrassment or discomfort in those who suffer from them.

As they manifest in different ways, they also have various causes. Therefore, they develop with different signs and symptoms and require different treatments.

How can you differentiate between them? Below, we’ll tell you about their main characteristics.

Many different factors, including heat, infections, allergens, medications, and immune system disorders, can cause skin rashes. Therefore, to get adequate diagnosis and treatment, you need to consult a specialist.

After examining you, the medical professional may indicate the use of medicated shampoos, creams, ointments, or other types of products to control your symptoms.

So, what are the most common types of skin rashes?

First, one of the most common types of skin rashes is atopic dermatitis. This condition manifests itself with intermittent flare-ups that come and go.

Often, it causes intense itching and redness. In fact, according to the phase, it’s in, it can cause red plaques, marked skin folds and peeling.

Unfortunately, experts still don’t know what causes this skin condition. However, a study that was published in the International Journal of Health Sciences states that it’s more common in people with a family history of seasonal allergies and genetic predisposition or asthma. Also, environmental and dietary factors play a role.

Next, psoriasis is a chronic inflammatory skin disease with a strong genetic predisposition and autoimmune pathogenic traits. According to studies by the International Journal of Molecular Sciences, the global prevalence is approximately 2%. However, it varies according to region.

Overall, the dermatological manifestations of psoriasis are varied. It may cause itchy, erythematous, and delimited plaques covered with scales. The plaques can merge and cover large areas of the skin.

Typically, it affects the following areas:

This article may interest you: Scalp Psoriasis: Symptoms and Treatment

Direct contact with allergens causes allergic contact dermatitis. Often, only the area that came into contact with the allergen is affected. Common allergens include perfumes, costume jewelry, hair dyes, and cosmetic products.

Overall, the following are the most common symptoms:

Next, tinea versicolor is a skin pigmentation disorder a lipophilic fungus called Malassezia spp causes. It’s a superficial mycosis characterized by well-defined skin lesions that are slightly scaly and vary in color.

Studies conducted by the Brazilian Society of Dermatology concluded that there’s a higher prevalence in young people in puberty, with a majority being women. Hypochromic skin lesions are the most common and predominate in the upper body.

Seborrheic dermatitis is one of the most common types of skin rashes. It’s caused by inflammation of the most superficial skin layers. It commonly affects areas with many sebaceous glands.

Experts don’t know what causes it. However, a P&T publication states that it may be associated with the presence of the Malassezia fungus. Obesity, extreme climates, neurological disorders, and stress are risk factors.

Overall, the symptoms it causes include the following:

Read on to learn more: The Differences between Atopic and Seborrheic Dermatitis

Herpes zoster is also known as “shingles”. This is a viral disease caused by the reactivation of the varicella-zoster virus that remains latent in the sensory nerve ganglia after a previous chickenpox infection.

The virus causes local inflammation and blisters on the skin. The pain this condition causes is due to the inflammation of the nerves affected by the virus.

Overall, some of the triggers of shingles include:

Next, dermatophytosis is also known as “ringworm”. This infection is caused by fungi, which can affect the skin and nails. Symptoms and signs of ringworms include peeling, itching, and skin rashes.

Typically, it affects the following areas:

However, different types of dermatophytes cause different conditions. Thus, the location of the injury determines the classification and type of fungus that caused it.

Rosacea is a chronic inflammatory skin disease that most commonly affects the face, as it’s one of the most visible skin areas. It causes redness, pimples, pustules, and dilated blood vessels.

It often affects the eyes. Also, in some people, it can cause a red, enlarged nose, a condition known as rhinophyma. Dermatology Reports concluded in a review that 15-40% of patients have a family history of the condition.

Next, pityriasis rosea is an acute papulosquamous disorder that resolves on its own. It causes a herald patch followed by scaly oval patches on the trunk and proximal limbs with a characteristic “christmas-tree” distribution.

Its exact cause is unknown. However, the upper respiratory tract infections that precede it suggest that Streptococcus plays a role. It affects people of both sexes, with an approximate incidence of 0.5 to 2%. The skin rash usually lasts six to eights weeks from the initial herald patch.

Its transmission is by direct contact where the mite remains viable between two and five days. Ten minutes of skin-to-skin contact is required for the mites to spread to another host.

This condition was declared a neglected skin disease by the World Health Organization (WHO) in 2009 and is a major health problem in many developing countries.

What to do if you suffer from skin rashes

Overall, there’s a specific treatment for each of these types of skin rashes. Therefore, if you’re suffering from any of these symptoms, it’s best to see a dermatologist. There, they’ll help you discover your treatment options according to your clinical picture.

In turn, your doctor will tell you what you’ll need to do to keep the discomfort under control. In some cases, the use of topical products will be enough. Meanwhile, in other cases, patients may need to resort to drugs and other interventions.

Tips to Prevent Skin Diseases
Anything that irritates, clogs, or inflames your skin can cause symptoms. In this article, we tell you about the most common skin diseases. Read more »
Link copied!
Interesting Articles
Illnesses
Do You Know about the Genetic Basis of Cancer?